Learn about the Library's humble beginnings, the people who worked hard to create and grow the Library, and milestones of that growth. The history of the Woodridge Public Library.

Welcome to the Library's online collection of historical photos, early newspapers, and other resources related to the beginnings of Woodridge.

Explore historical photos from the Village's history on Flickr in our Village History collection. The images displayed in Flickr are in JPG format. Some images are scans of copies of photos where the original photo has been lost.

Read about Woodridge history through five of our early newspapers donated to the Library by community members. These papers predate the Woodridge Progress.

Print and microfilm copies of the Woodridge Progress newspaper are kept in storage at the Library. There is also the following limited online access from within the Library building. 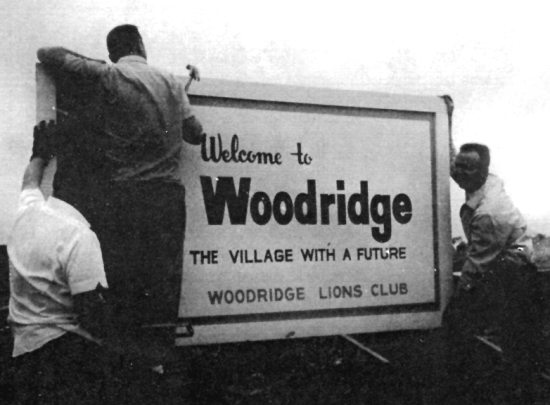 Woodridge Progress Newspaper (IN-LIBRARY ACCESS ONLY) - Keyword searchable, online images of each page from the May 22, 1969 - December 28, 1978 issues of this local Woodridge newspaper. The project to digitize this newspaper was generously funded through the Friends of the Woodridge Public Library.

Black Acres: A Remembrance - This film shows how the 100-year-old Nadelhoffer farm gave way to suburban sprawl. The Nadelhoffer farm was purchased in 1873 by John Nadelhoffer and sold to developers in 1972 due to high real estate taxes and a suburban housing boom. This film was created by Mary Lou Wehrli and Herb Nadelhoffer.

Farmers, Corn, Cows & Hazy Memories - Herb Nadelhoffer reflects on the role corn and farming had on his childhood and the history of DuPage County, while interviewing several friends and neighbors about farm life. This film was created by Herb Nadelhoffer.

Don't forget to check out the Library's Oral History Project, including remembrances from several longtime residents.

In 1984, the former Woodridge Area Historical Society (no longer existent) published Our Heritage - a leaflet summarizing Woodridge history up to that time.

Stay Up to Date!

Get the latest updates about what’s happening at the library!
Sign Up